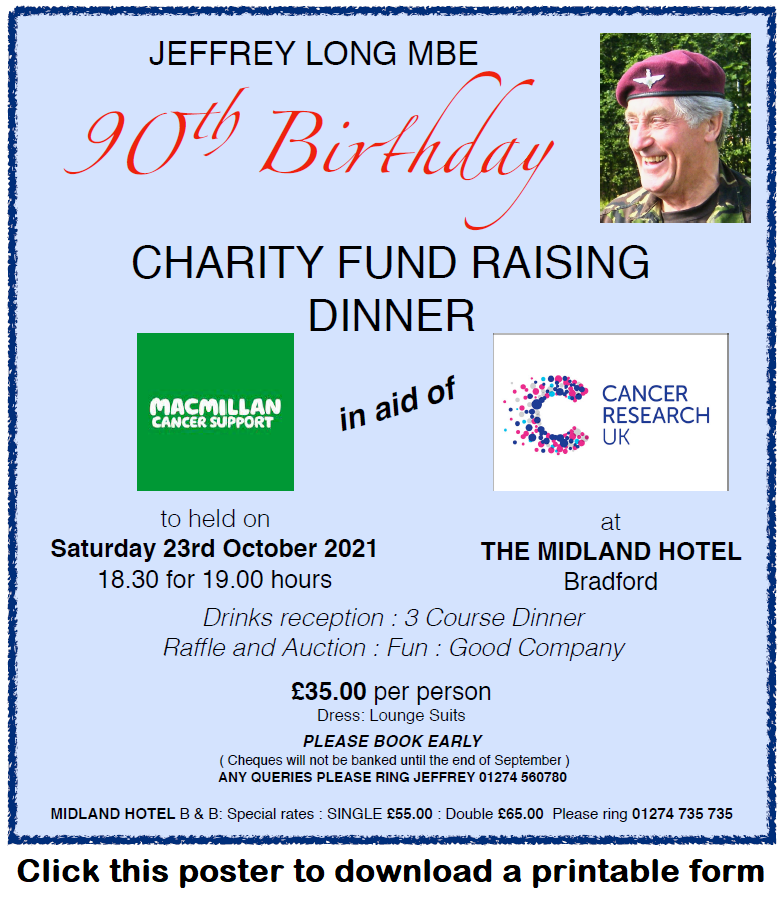 Derrick who served at Manchester, FHQ and Carlisle was 81 years old and had been suffering with bowel cancer.

Please see the below regarding a TV series on Railway Murders which you may find of interest.

Thanks to Tony HAIGH for bringing this to our attention.

This coming Sunday (2nd May) there is a series of programmes on the Yesterday channel (freeview 26 and Sky 155). It is titled RAILWAY MURDERS and comprises six episodes:-

3) 13:00hrs - Police Killer the story of the first Railway Police Officer to be murdered.

Can you please advise the members of the passing of Kevin Colgan.  Kevin retired as an Inspector on the LU Area in the late 90's He was promoted to Inspector LU from Uniform Sergeant Southampton, and I believe he was Paul Crowther's first duty officer. Kevin died peacefully with his family around him yesterday.

We have no further information.

We have been informed that ex Detective C/Inspector Victor Michael MILLER passed away on 28th February 2021 after a lengthy illness.

I have no other details at this moment and will be updated later.

For the first time an ex BTP officer has been appointed as the Surveillance Camera Commissioner AND as the Biometrics Commissioner. Both posts were created under the Protection of Freedoms Act 2012 and are high profile public appointments. Dr Fraser Sampson will take up his work later in March 2021. The Home Secretary said: “It is vital the government works to empower police to use technology to keep the public safe while maintaining their trust and Fraser Sampson’s extensive experience in law and policing makes him the right person to take up this role.”

Fraser joined the BTP in the early 1980s and served in the North East Area. He was later seconded to the Home Office Central Planning Unit at Harrogate (now the College of Policing) where he worked as a legal researcher specialising in the application of the criminal law in operational circumstances. He returned to the force and later, in 1992, became an inspector at Tadworth FTC. His work included introducing many innovations in training as well as leading the training team in their own development. His time at Tadworth coincided with a particularly active PIRA campaign so he led operational deployments in the south east when required. He returned to Leeds as an Inspector and was later seconded back to central service. He left the force as a superintendent in 1996. After BTP he qualified as a solicitor working in the area of police law. He wrote several of the Blackstones Police Promotional Manuals and is a prolific author. He became Director of the Civil Nuclear Police Authority and went on to carry out similar roles with West Yorkshire and North Yorkshire Police. During his time at Tadworth he offered support to officers who were working to preserve and collect material relating to the history of the force. We wish him well in his new job.

I attended at Great Heck and am coordinating arrangements for a live-streamed memorial service at Selby Abbey this year and attach a briefing note for circulation to the History Group and anyone else who may be interested. There are two events taking place, both live-streamed at 1000 and 1400. I am informing all other emergency services and BTP Media Relations at FHQ, and am liaising with the railway operator, Network Rail and relatives of the deceased.

I also attach a copy of the commendation ceremony booklet from 2003 which provides further information”.

Memorial Events for the 20th Anniversary of the Great Heck Rail Crash Sunday 28th February 2021 What happened At 6.12am on Wednesday 28th February 2001, a Land Rover pulling a trailer on the westbound M62 motorway in North Yorkshire left the carriageway and ended up fouling the main southbound line. Almost immediately afterwards, the 04.45 GNER passenger train from Newcastle to London King's Cross struck the Land Rover partially derailing the driving cab. Some fifteen seconds later, the passenger train struck an oncoming freight train carrying coal. The two trains were derailed killing the coal train driver and the passenger train driver, together with eight other people on the passenger train. Eighty-six people were injured, some severely. What is taking place on 28th February 2021 The 20th anniversary of the Great Heck rail crash will be remembered with commemorative events taking place at Newcastle upon Tyne Central Railway Station, the Great Heck Memorial Garden, and in Selby Abbey. National coronavirus regulations and lockdown restrictions in England severely limit what is legally permissible, so these acts of remembrance will be live-streamed. Details on how to watch them online are given below. 10am Memorial Event 1: Newcastle and Great Heck Train operator LNER, together with Network Rail and Freightliner, is hosting an online memorial which will be live-streamed from Newcastle Central Railway Station and the memorial garden at the crash site at Great Heck. Wreaths will be laid and there will be readings, which will pause as an LNER passenger train passes Great Heck and sounds its horn as a tribute. If you would like to watch this online memorial you will need to register. Please click HERE to register. If you have any questions, please email them to greatheckanniversary@lner.co.uk. 2pm Memorial Event 2: Memorial Service at Selby Abbey, North Yorkshire There will be an online memorial service live-streamed from Selby Abbey, led by Canon John Weetman, Vicar of Selby Abbey, and the Reverend Peter Hibbs. A commemorative candle will be lit for each of the ten men who lost their lives. To watch the service please click HERE. You do not have to register. If you have any questions, please email them to GH20Memorial@gmail.com

Information from John O'donnell
Death of Pat WALTON (23/3/38x1/1/21)former constable Newcastle and wife of Jim DI FHQ.
Sorry for late notification but I received late notice from Jim’s daughter Marie-Claire that Pat had died on 1 st January 2021.
The funeral was held at Sacred Heart Roman Catholic Church, Leighton Buzzard today and was well attended given the Covid circumstances.  The committal took place at the old Linslade cemetery.
Not sure of her service details but guess you can obtain these and I can through Jim’s daughter get more detail if you want as I guess there may be retired officers who will remember Pat and certainly remember Jim if you could include Pat in the retired lines.
Trust you are keeping well and look forward to seeing you at some stage in the hopefully near normal future.